Sewing Lingerie Part Two: I made a vintage lingerie set

I posted a while ago about my plan to delve into the world of lingerie sewing. I have (finally) dipped my toes into the pool, so to speak. I wanted to start simple so I made a bra type halter top and matching french knickers.

I used Simplicity 3250, which I have made before, for the top but I lengthened the bottom pieces so that it's more a midriff style. It looks way cuter on than in the photos (I know, I say that all the time), but you're just going to have to trust me on that because I am too shy to put pictures of myself wearing it on the internet. 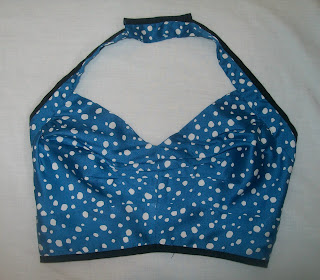 The fabric is some vintage silk I got for $7.00. It was my first time sewing with silk but since it was relatively thick and stable it wasn't too much of a problem. I didn't have any bias binding that matched the fabric so just used some black for contrast. 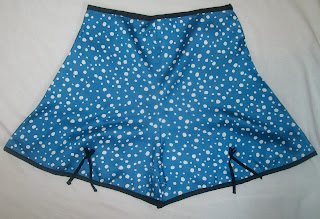 The french knickers have little bias binding bows because well...I put bows on everything. 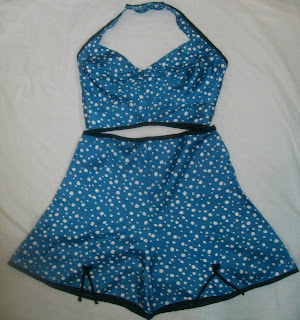 I'm pretty pleased with them for my first try. It's given me more confidence to try something a little bit harder.

I have started my first June Challenge dress but I've got two essays due on Friday so I probably won't have time to finish it before then. I have the rest of June off after that though, so I will (hopefully) have plenty of time to do all four dresses.
Posted by Camelia Crinoline at 8:10 PM
Labels: sewing lingerie series