I was going to try and finish my dress yesterday but then the weather turned out glorious. I didn't much feel like sewing a wool dress while the sun was shining so, instead, I did something that had been on my to do list for a while. Glittery shoes! I have wanted to try covering a pair of shoes in glitter ever since I saw the tutorial on Rhia' s blog, Evil Dressmaker. I sat on the deck in the sun (gotta get that vitamin D) with some paint, glitter and glue. It was like being back at primary school. Playing with glitter was just as fun as I remember. 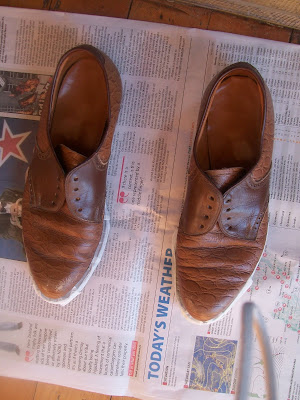 I was going to give these brogues to the op shop because I don't really wear brown shoes but I thought they would be perfect for covering with glitter. I had to paint them red first so the brown didn't show through. 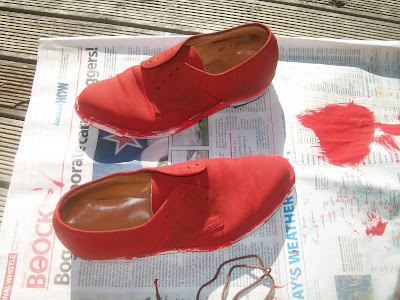 I did four layers of the glue and glitter letting each layer dry before doing the next. They dried really quickly because it was so sunny. 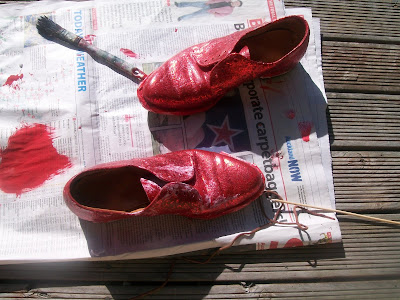 I added some ribbon as laces. 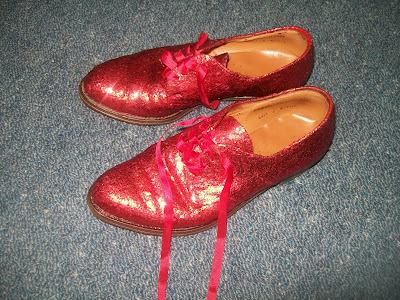 The picture below is closer to the true colour. I love the way they turned out. I want a pair in every colour. 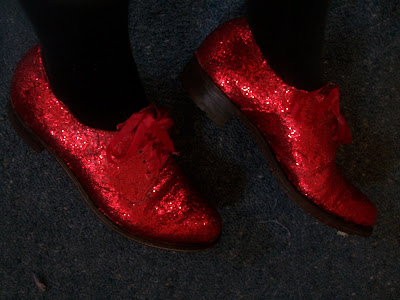 I was going to buy some organza to do my bound buttonholes on Monday but then this happened...again. 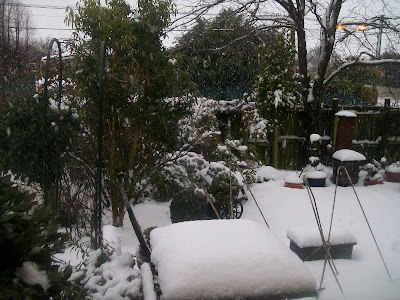 Cue three days being stuck in the house. It wasn't like that just in Christchurch either. It seemed like pretty much the whole country got snowed in. Even subtropical Auckland (way up north) got a tiny smattering. I finally got to the fabric store by the end of the week, so I spent yesterday practicing my bound buttonholes and then doing the real ones on the bodice of my dress.


Bound buttonholes have always seemed to me like some sort of scary monster that only expert sewers tackle. I think the most terrifying thing is that you have to cut into the fabric before you know if they're going to work. If you screw them up you've ruined your whole garment. I was determined when I started Simplicity 5098 that I would finally do some. The pattern suggested doing bound buttonholes and I thought they would look neater because the button detail is a focal point of the dress. Also, because they are rarely seen on ready to wear clothes these days, they always seem vintage-y to me.

I used this tutorial from Gertie's New Blog for Better Sewing. I've seen many different techniques for doing bound buttonholes but I definitely think this is the best. I think it gives you a lot more control and consistent results.

The tutorial says to use silk organza but, let's face it, I wouldn't even know where to buy that in Christchurch. The few fabric stores that would possibly sell it were destroyed in the quake and even a small piece would probably be way more than I am willing/able to spend. I just bought some cheap (about $5/m) polyester organza from Spotlight and it worked just fine.

These are a couple of my practice ones. 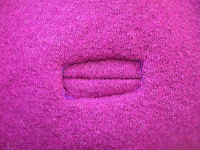 The first one wasn't that great because I used pins instead of basting. If you're going to try it I would definitely recommend basting everything.

These are the real ones. 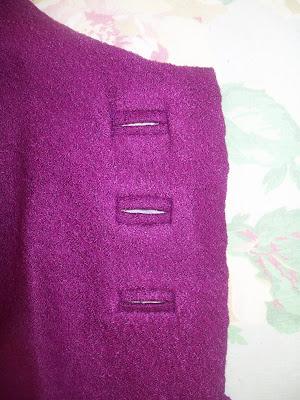 I'm not quite sure why my camera made the fabric look lighter around the buttonholes but it isn't like that in person. They're not perfect but I'm pretty pleased with them. You can see the purple organza I used in the corners slightly but it's only noticeable if you look closely. It doesn't actually matter if they're not perfectly uniform because once the buttons are done up you can't even see the buttonholes. 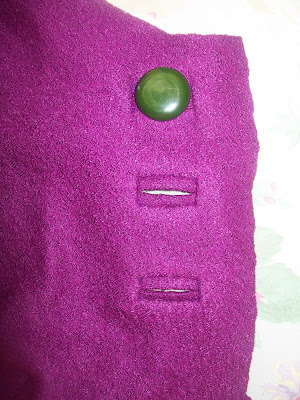 Verdict: Not as difficult as I thought they'd be and definitely worth the effort. I see myself making lots of clothes with bound buttonholes in the future.

Sometimes I feel like I have plateaued in terms of my sewing. While I have been trying to sew with different fabric (it is so hard for me not to make everything in florals or polka dots), I haven't really picked up any new techniques lately. Enter Check the Technique created by the super awesome Reana Louise. Basically, you create a list of techniques you haven't tried, try them and then write about your success/failure.

My list of techniques (some stolen from Reana Louise):

I will probably add to this when I think of some more. 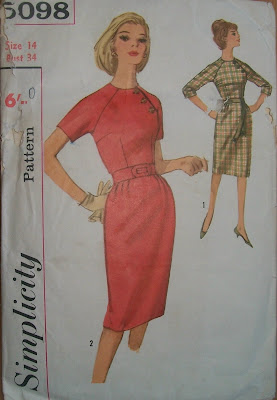 Incidentally, the next pattern on my list has three new techniques; bound buttonholes, raglan sleeves and drafting a lining. I'm sewing Simplicity 5098 in a textured purple wool with bright pink lining and green buttons. The purple is actually richer than it looks in the photo. 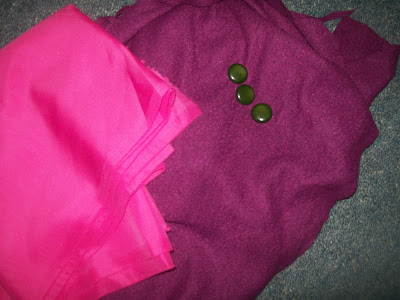 Sorry for not having more substantial posts lately. I have tests and essays and research projects all in the next week so I haven't been doing any sewing.
Posted by Camelia Crinoline at 6:16 PM 6 comments:
Labels: check the technique

It's in the bag I found these two wooden beaded bag handles at the op shop last week. They were mine for the ridiculously low price of 50 cents. I went digging through my stash but didn't really find anything that grabbed my attention until I happened upon a barbecue themed novelty print in my Mum's stash (her stash totally rivals mine). 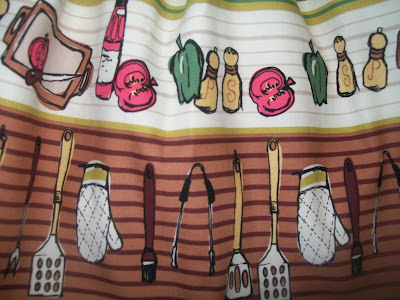 It was only a small piece, but the perfect size for the type of bag I had in mind. Luckily, Mum was generous enough to let me have it. To continue the outdoor eating theme, I decided to use some picnic style peach gingham for the lining (also from my Mum's stash). Since both fabrics were thin quilting weight cotton and were slightly see through I underlined with some white cotton. 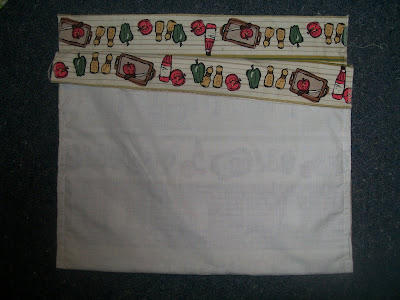 I used a combination of this tutorial and this one, plus a bit of make-it-up-as-you-go-along. The construction was really easy until I came to attaching it to the handles. I tried the technique in the tutorials I linked to but the gathers at the top looked really messy. Mum (what would I do without her?), suggested I make a smaller machine stitched casing at the top. This worked way better. 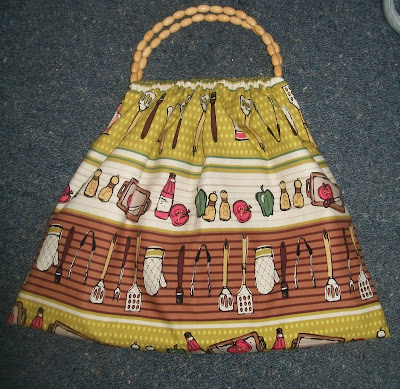 I'm really pleased with the way it turned out. The fabric reminds me of a fifties novelty print which I love. Now all I need is warm weather and some TVP sausages and I will be set to barbecue in style. 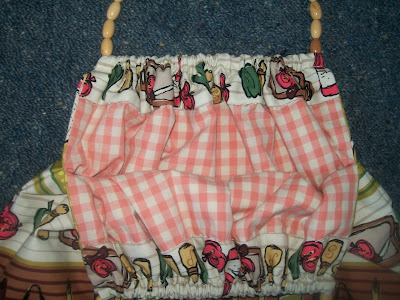 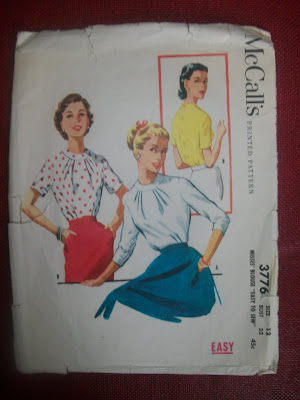 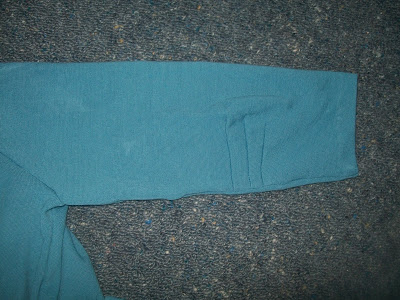 It's really warm and comfy. I will definitely be making a few more of these in an array of colours. Next time though, I'll sew the pleats in the front down and take it in more.
Posted by Camelia Crinoline at 9:07 PM 9 comments:
Labels: 50s, knits, McCall's 3776, sewing, wool blouse
Newer Posts Older Posts Home
Subscribe to: Posts (Atom)