This is actually the picture I took for day four of SSS but I never ended up posting it. I got the cardigan at an op-shop about a month ago. The photo isn't very good but the cardigan's amazing. It's made of wool and the bodice is lined which is something I've never come across before. I think it may be from the 60s. The beading continues around the back of the neck as well. I'm a bit scared to wear it too much just in case any of the beads come off.
I've been trying to get back to posting regularly but after the earthquake my laptop cord decided to stop working and I've only just got a new one.
I have a couple of pairs of sailor style pants that I'm almost finished sewing so I will try and get some pictures of them this week.
Posted by Camelia Crinoline at 9:44 PM 7 comments:
Labels: beaded cardigan, op shopping finds 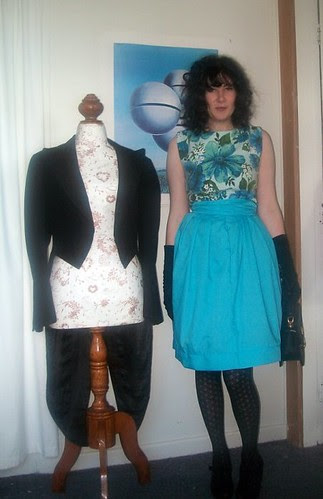 Sorry I haven't posted in a week. Things have been a bit crazy around here since the earthquake. Thanks for all your sweet comments on my last post. We have continued experiencing aftershocks for the last week and they may well go on for the next couple of months. The damage to my house is worse than we originally thought but we got both the hot and cold water restored yesterday which was nice. The novelty of being able to turn on the taps, flush the toilet without a bucket of water etc, has still not worn off. I'm so incredibly lucky though. Many people, including some I know, have lost their whole homes or their businesses.
I don't want this post to be all gloomy so I thought I'd show you a dress I finished a couple of weeks ago. It was originally meant to be a wiggle dress, using the bodice of Simplicity 1192 but after I had cut out the skirt I realised the fabric had a big hole in it. The floral fabric, which I bought at Stash Rehash, had quite a few holes in it but I thought I had made sure to avoid them when I was cutting out. Obviously I hadn't. The bodice was fine so I decided to try and find some fabric that went with it to make the skirt out of. I spent ages trying to find a similar blue to the flowers but I had to make do with a sort of turquoise colour. It's not perfect but it's alright. The skirt is just a couple of rectangles with some pleats in it. I like that it kind of gives it an early 60s feeling.
The sash is made from a piece of left-over fabric and just ties around my waist.
While the dress itself is quite simple it took me months to finish because I couldn't find the motivation after so many hiccups. I finally had to impose a rule that I couldn't start sewing anything else until I finished it. This actually worked and I got it done if only so I could sew other things.
It's not my favourite dress but I probably will end up wearing it a bit because it is simple and comfortable.
Posted by Camelia Crinoline at 4:51 PM 5 comments:
Labels: dress, earthquake, sewing, Simplicity 1192

As you may know, Christchurch, where I live, was hit by a massive earthquake in the early hours of yesterday morning. Apart from being the single most terrifying experience of my life, we escaped with minimal damage. Our chimneys collapsed and there are cracks in a few of the walls but it is nothing compared to the devastation experienced by many. Self-stitched-September has, for the moment, gone out the window. At 5am this morning, in the cold and without power, I put on as many clothes as I could find. I'm happy that family, friends and my fellow Christchurch bloggers are all okay. Thankfully, at this point, there has only been one death in the city and mostly minor injuries.
As I write this we are still experiencing aftershocks and it will probably be a while before the city is functional again. I'm incredibly sad for those that have lost everything but so touched by the kindness of my neighbours, who came over at 4.30am, in the dark, to check if I was okay and who removed the chimney bricks that were in danger of falling off the roof.
I hope everyone in Christchurch is staying safe and warm.
xx
Posted by Camelia Crinoline at 10:09 AM 17 comments:
Labels: earthquake

I have, on day two, already run into a slight problem. Usually I wear an old pair of jeans and a hoody while dying my hair but when I went to dye my regrowth yesterday I realised I didn't have any 'old' clothes that I have made. I wasn't willing to wait until the month was over to get rid of my roots so that's how I found myself dying my hair in my self-made pyjamas. Miraculously, I managed to keep them free of dye.
After that slight hiccup I changed into my grey wool dress, made from the bodice of Butterick 5032 and a self-drafted skirt. Obviously I am on a purple kick at the moment. In the last three posts I've done I've been wearing purple.
The belt is the sash from another dress I made.
I tried doing a 40s style headscarf to cover my wet hair but I ended up looking more like a washer woman than Rosie the Riveter. It's strangely appropriate given I spent the day doing washing and other mundane jobs.
Posted by Camelia Crinoline at 12:59 PM 4 comments:
Labels: Self-Stitched-September

I don't think I have posted my pledge for Self-Stitched-September yet so here it is:

I, Camelia Crinoline, sign up as a participant of Self-Stitched-September. I endeavour to wear only handmade and refashioned items of clothing (excluding underwear, hosiery, shoes, cardigans and accessories) every day for the duration of September 2010.

Basically I will try and wear only skirts, dresses, blouses, pants and pyjamas that I have made. I briefly considered whether I should make some cardigans out of some knit fabric but I already own a lot of cardigans (like over 20) in almost every colour. It seems a waste sewing things I don't particularly want or need for the sake of being able to wear them for SSS.

For day one I wore my purple version of Burdastyle's Jenny skirt and also one of my Port Elizabeth tops from a pattern by Goldfinch and Eagle.
Posted by Camelia Crinoline at 12:02 PM 6 comments:
Labels: Self-Stitched-September
Newer Posts Older Posts Home
Subscribe to: Posts (Atom)