I actually made something and I bought a dress

I've been wanting to make a bow belt ever since I saw the tutorial over at Casey's Elegant Musings. I loved the original patent leather belt that the design was based off. I looked for some vinyl at the fabric store but they only had thick furniture weight in matte colours. I also kept a lookout when opshopping for a leather skirt or something which I could cut up and use. I didn't have much luck until the other day when I found the skinny patent belt in the picture below. I had bought the large patent belt ages ago but I didn't wear it much because it was too bulky. The colours were a perfect match so I figured I could use the small belt as the base and cut up the big one to make the bow. 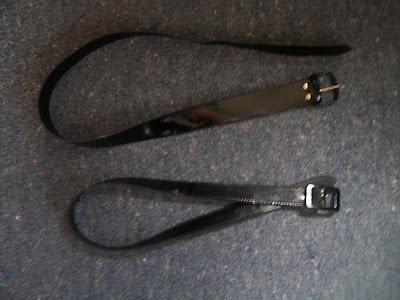 I cut a strip along one side so it had one of the rows of stitching from the original belt on it. I planned to do another row of stitching along the other side but after sewing some practice bits with a leather needle and a teflon foot I wasn't sure that my machine (an 80s Brother) would cope with it. My Elna is in getting a service at the moment otherwise I would have used that. I have read that people use Supermatics to sew leather shoes together. I am impatient and I didn't want to wait the 10 or so days it will be before I get my machine back so I just decided not to do the other row of topstitching. Once I folded it up into the bow it wasn't actually that noticeable that only the top edge was stitched. 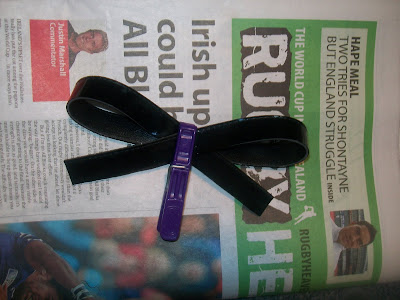 Peg to hold it while the glue was drying


I used some random glue we had at home that said it could be used on leather. Since I didn't actually have do any sewing, it was simply a matter of gluing all the pieces together and letting them dry. I glued a button in the middle because I tried a tab but the thickness of the material made the bow look all squashed and funny. 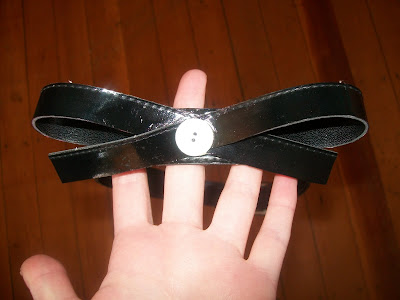 The flash on my camera makes it look like there are marks on the bow but it's just the light.

I expressed my love of toile a couple of posts ago so when I saw this dress at Small Earth Vintage I just had to buy it. The exchange rate is actually quite good at the moment (for once) so browsing Etsy is dangerous.

I really need to stop slouching

I forgot to take a close-up of the toile fabric but you can see it and the belt slighter better in this picture.

I'm really pleased with the way the belt turned out. I want to make a ton more in all different colours. Maybe red next time?

I'm still working on my purple wool dress at a snail's pace. I can't seem to work up the energy to sew it quickly because, with the warmer weather, I'm probably not going to be able to wear it until next Autumn anyway.
Posted by Camelia Crinoline at 5:41 PM
Labels: bow belt, DIY, vintage dress