I get asked this question quite often. Or, more frequently, I get told by people that don't sew that sewing is not cheaper than buying new clothes. My answer to this is usually, "It is for me". This is for numerous reasons.

Before I tell you why it's cheaper for me, you should know that new clothing here in New Zealand is probably more expensive than it is in places like the UK or the US. Fabric and sewing supplies are more expensive too. We have a small population and are pretty isolated so almost everything is more expensive and harder to get.

I guess the start up costs for sewing can be quite high if you want to buy everything new and you want lots of gadgets (I'm not judging). I learnt to sew on my Mum's sewing machine that she bought second hand thirty years ago. It's still going strong. It doesn't have many fancy features but it does a good job. Both of the sewing machines I own are second hand. One of them was a birthday present from my parents and I've been using it for about five years. It's from the early 80s, is good quality and will probably last for years yet. The other one is a 1950s Elna that I bought for $15 at an op shop. The man at the place where I got it serviced said it was in perfect condition which isn't bad for something that's around 60 years old. Sewing does require an initial investment but it doesn't have to be a big one.

You may be able to get a dress cheaper than I can make a dress, but it doesn't mean that you can get a dress comparable to one I've made. I love vintage clothes and predominantly sew with vintage patterns using vintage or vintage style fabrics. I can't buy the style of clothes I like new very easily. Occasionally 'vintage' will be in for a season and vintage style clothes will flood the chain stores but I still don't buy those because they don't fit in a way that I like (too short, too much ease etc). I could probably buy a new dress from the mall for about $50 but I prefer to compare the cost of the dresses I make to the cost of buying a similar vintage dress because when I sew something I want it to look like it is vintage. 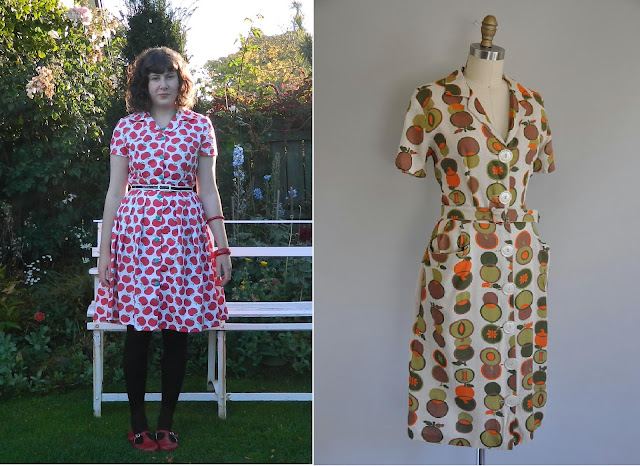 The dress on the right is US$185 (NZ$240) not including shipping. Don't think that I'm criticising vintage sellers for their prices. I'm not. I realise that they have to make a living. I love vintage and I do buy it, I just can't afford to buy all vintage clothes. Instead, I make clothes that (hopefully) look vintage but cost me less than vintage would.

This kind of follows on from the above point. While my sewing is far from perfect, the things I sew are usually better quality than what you can buy at cheap chain stores. I don't shop at cheap chain stores because I have ethical issues with them but sometimes I buy chain store clothes from the op shop. Quite often these clothes have rarely been worn and some still have their tags attached. I'm pretty careful with my clothes and handwash a lot but I've found the quality of most chain store clothes is pretty terrible. I have things that I sewed about four years ago that are still in good condition and that I still wear. Most chain store clothes I buy from the op shop start looking shoddy after a couple of washes (yes, I know they're already second hand when I buy them, but still).


I try and sew using natural fibres like cotton because I'm not a fan of synthetics. It's hard to buy cheap new clothes made of natural fibres. At the moment I'm making a circle skirt made of 100% wool fabric. You pretty much can't buy anything that's 100% wool at chain stores here. I also try and sew clothes from fabrics which will wear well. It is far cheaper for me to make a wool circle skirt than to buy one (if I could even find one here). It will probably last longer too, which will save me more money in the long run. Rather than comparing the clothes I make with poor quality/cheap clothing, I'd rather compare it with clothing of a higher quality because this is a better comparison. For me it is definitely cheaper to make higher quality clothing than it is to buy it.

I was kind of hesitant to write about this one because I'm not perfect and do sometimes buy things new that were probably made by someone who was paid very little, is banned from joining a union, and is not protected by health and safety regulations. I'm also aware that some people are not in any position to buy things that were not made in those circumstances. I don't want to make people feel guilty if they can't afford to buy clothes made in ethical circumstances because I'm not in a position to buy them either.

We all know that one of the main reasons that cheap clothing is so readily available in many western countries is because of the use of cheap overseas labour. Sewing your own clothing means that you know that your clothing wasn't made in a sweatshop. However, this doesn't mean that the fabrics and notions you sew with weren't manufactured in similar conditions. The cotton picking industry in particular is known for exploiting its workers, including children. Unlike clothing, fabric does not usually have a country of origin label so it is impossible to tell where it was produced. While I try and buy fabric and notions second hand there isn't exactly an abundance of fabric in the op shops where I live. Most of my zips and buttons are from op shops. I do buy new fabric when I can't find it second hand. While part of the reason I make my own clothes is because I don't want to support companies that use sweatshop labour, I'm well aware that sewing is certainly not a perfect solution. In saying that, I do think it's hard to compare the price of clothes that were made in poorly paid and often unsafe conditions to something that has been sewn by someone for themselves. Sweatshop made clothing is cheaper only because of the way that it's been made. If I compared the clothing I make to clothing made here in New Zealand (which presumably uses fabric sourced from overseas) then the things I make would be far cheaper.

In the end sewing is cheaper than buying new depending on how you judge what "cheaper" is. I know that sewing my own clothes is cheaper for me. Sewing is also my hobby and I enjoy it so the fact that it saves me money is only one of the many reasons I do it.

If you sew, do you think it's cheaper for you than buying new?

Posted by Camelia Crinoline at 5:37 PM
Labels: rant, the politics of sewing