Sail away with me honey*

I'm pretty sure I've expressed my love of novelty prints about a million times before on here. One of the best places to get vintage style novelty prints is in the children's section. Ages ago, I found some awesome sailboat printed fabric in the kids fabric section on Trademe for $7. I was going to use it to make a skirt but then I saw this sailboat print shirt by Milly (it costs US$230 which is like NZ$300!!!). 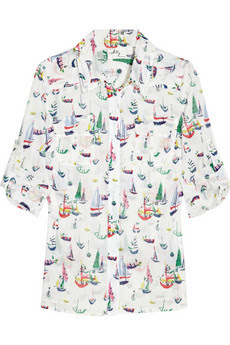 I wanted a more 50s style than the Milly shirt so pulled out Butterick 9405. I've already made this pattern twice so it went together pretty quickly. I made view D. 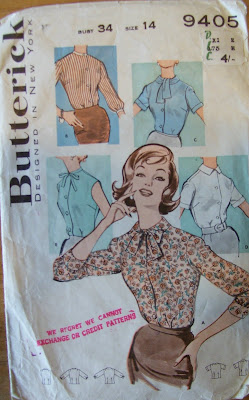 What on earth is that woman at the front doing?

I did darts at the front instead of tucks but that's the only change I made. I did french seams where I could because I am obsessed with them. I actually finished this a little while ago but the print made it a total nightmare to get an okay picture of it. I tried three times to take photos but the bright white background of the fabric made all the pictures blurry. I used some vintage buttons that I love but haven't been able to use until now because there are only three of them. It closes with a snap at the top because there's not enough room for a button. 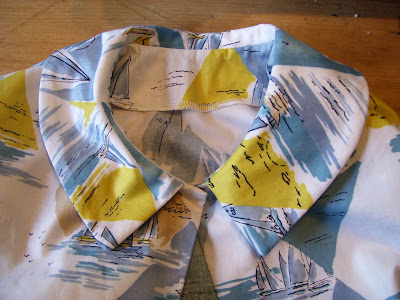 *Incidentally, I don't like sailing or going on boats because I get seasick. My face turns green and I think I'm going to die.
Posted by Camelia Crinoline at 9:41 PM
Labels: blouse, butterick 9405, novelty print fabric